We started today’s session with our usual routine of “Hello, Friends” and “Roly Poly” before jumping into a reading of The Bus for Us. 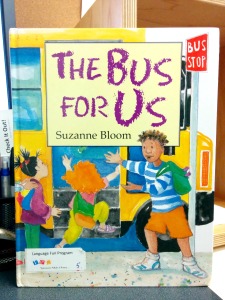 The kids went nuts for this one – I’ve never seen them so excited and enthusiastic about a book! They eagerly shouted out guesses for what each vehicle might be. We were easily able to elicit vocabulary, with each child excitedly telling us what colour each vehicle was, and the tension building up to the eventual appearance of the long-awaited bus was palpable.

The group was no less excited for the felt story retelling – the SLP had each vehicle peek out from behind the felt board, and gave hints as to what each vehicle might be (“it is red, it has a ladder, it is very loud”). These great felts are from a local home-based business called “Heartfelt Stories” – their felt stories are super cute! Hurray for supporting local small businesses. 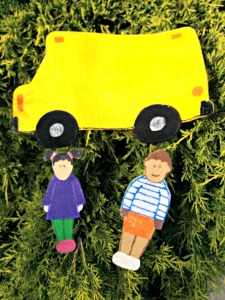 The kids have been getting pretty wiggly recently, so we took a little song break after the felt story for a round of “the wheels on the bus.”

Then it was time for the toys! We went around the circle with each child picking out a vehicle. In order to get a toy, though, they had to describe it to us using as much vocabulary as they could. For example : “I want the garbage truck. It is green. It is smelly”. 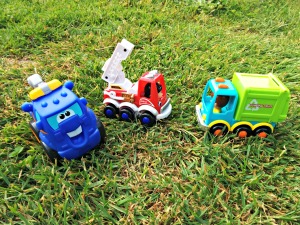 Once all the vehicles had been handed out, and the kids had had a moment to drive them around, the SLP started describing each vehicle one by one, in random order. The children had to listen to the descriptions, and when they heard the description of their vehicle they came up to put it back in the toy box. So, “This truck is green. It is smelly. It picks up garbage” would be the cue for the child with the toy garbage truck to put it away. This activity was a great opportunity for the children to learn and practice new vocabulary while reinforcing existing words in a really fun way.

The kids were having so much fun we nearly ran out of time, and had to rush a little bit through snack time.

I can’t believe there’s only one more session of LFST! The children have changed so much over the past few weeks, it’s incredible. The most obvious change for most of the children is in their confidence level. LFST is a group activity, and children are encouraged to participate in front of their peers and a few grown ups (parents). For children with speech-language delays, speaking in front of others can be a terrifying prospect. Through small group activities like LFST, children can practice speaking in front of others in a safe, positive environment, and gradually build their confidence. Like so many library programs, the benefits of LFST are many, and the program impacts children in such a variety of ways.

My first real story time after a 2 month absence. I will admit it, I was terrified. My voice is still weak and terrible, and although I have a handy-dandy new portable voice amplifier, I still can only speak for a short period of time, before my poor voice pretty much evaporates. I spent the night before worrying that my voice would just cut out completely half way through and we’d have to have a mime story time, and I’ll admit it was a bit tougher than a usual story time, but I made it through, and I couldn’t be more pumped!

The trick I found was to pick short books with lots of audience participation, choose songs that everyone knew so I could just lip synch for most of the time, drink lots and lots of tea, and use my voice amplifier when I had to talk so I could use almost a whisper and still be heard.

It felt weird with the silly headset on, I felt like I should be taking orders at the drive through, but I’ll be upgrading to a wireless one soon with a little collar microphone, which will be awesome! And I have a quiet week off in between programs to recuperate. All is going according to plan!

Here’s what we did on my first exploratory trip back to the fold: 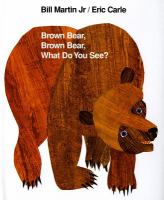 Book 2: The Bus for Us / Suzanne Bloom 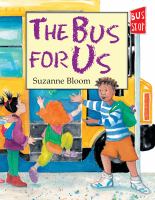 The kids just went nuts for today’s books, it was awesome. I pulled out “Brown bear” and a little boy cried out “animals! I love animals!” I had the group tell me what each animal was and name its colour, and make suitable noises when appropriate. I must confess I’d never used that book before in one of my story times, and it was a total it!

It was my first time using the little puppets too, and the little ones were speechless. Seeing the little turtle pop in and out of his shell pretty much blew their minds. We had to say the rhyme a couple times, due to audience demand. Who knew something so simple could be such a big hit?