This interview was originally posted on the BC Library Association’s LGBTQ Interest Group website – be sure to check out their blog for great LGBTQ resources, and subscribe so you don’t miss a post.

Robin Stevenson is a B.C.-based author who has published fiction and nonfiction for kids and teens. Her works have been nominated for a number of awards, including the Governor General’s Award and the Silver Birch Award. She recently sat down with us to talk about her career, her experiences as an LGBTQ writer and parent, and her suggestions to libraries looking to better serve LGBTQ patrons.

Can you tell us a bit about yourself and your career as a writer?

I worked as a social worker for ten years, mostly providing counselling for sexual assault survivors. I moved to BC from Ontario in 2001, and I began writing four years later, while on maternity leave. I wrote a handful of short stories, one of which unexpectedly turned into a YA novel. It was published in 2007. The following year, I published four books for middle grade kids and teens, one of which- A Thousand Shades of Blue- was a finalist for the Governor General’s Literary Awards and the BC Book Prizes. So I kept on writing and never did go back to social work. I’ve written twenty books for kids and teens, including the 2014 Silver Birch winner Record Breaker. My 2015 middle grade novel, The Summer We Saved the Bees, is currently shortlisted for both the Red Cedar and the Chocolate Lily awards. I live in Victoria with my partner and our 12 year old son. 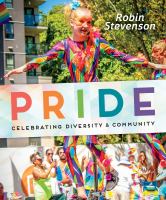 You’ve got a new nonfiction book out, “Pride”, which introduces children to the history of the Pride movement. Can you tell us a bit about your experiences researching and writing the book? What are some take-aways that you hope children will leave the book with?

I loved writing Pride. My novels tend to be rather solitary projects, but Pride was all about connecting with people and hearing about what Pride meant to them: trans kids, queer teens, lesbian moms, intersex activists, drag queens, LGBT historians, local people and people from around the world. I was so moved by how generous everyone was, and how willing to be a part of this book—so many people shared stories and thoughts and photographs. Others read various drafts and gave me important critical feedback. They made the book much better and I made some wonderful new friends.

I had three different audiences in mind when I was writing. First, kids and teens who are themselves LGBTQ or questioning, and kids, like my son, from queer families. These kids rarely see their own lives and experiences and families reflected in the books they read. Many of them face bullying at school and rejection by their families, and others lack the safety and support to come out. I wanted to tell them that even if their current reality is a hard one, they are the newest generation of a courageous, resilient and diverse community—a community that they will find their own place in. They have a history that they can be proud of and a future that, despite everything, looks better all the time.

I also wrote Pride for the rest of the kids- the ones who aren’t part of our community and may not know much about it. Because it isn’t just up to the LGBTQ community to dismantle heterosexism and queerphobia- it’s up to everyone. I think awareness and learning are an important part of building empathy and creating allies in the fight for equality.

And finally, I hope that teachers and parents will find Pride useful as a clear, welcoming introduction to LGBTQ history, community and identities. I have met many people who say that they’d like to discuss these issues with their students or their children but aren’t sure where to begin, or don’t know what language to use, or worry about how to handle questions that might come up. I’m so glad they see the importance of having these conversations, and I hope Pride will be an accessible and positive resource for them.

What advice would you give to libraries looking to create a meaningful, inclusive LGBTQ library collection? Are there any titles that you would consider must-haves for any collection?

I think it is important to include the full-spectrum of LGBTQ identities. LGBTQ book lists often focus heavily on books about gay male teens, and while these are awesome and important, so are the books about queer girls, bi teens, trans teens, non-binary teens, queer teens of colour etc. I also think it’s important to emphasize LGBTQ books written by LGBTQ authors who are able to draw on their own lived experience. With both of those points in mind, here are a few recent titles that stand out for me:

George, by Alex Gino. This is a middle-grade novel about a trans girl. It is sweet, realistic and very well-written—a great book for ages 9+. It just won both the Lambda and Stonewall Awards.

If I Was Your Girl, by Meredith Russo. A coming of age YA novel about a trans girl. Beautifully written, with an afterword by the author that made me love the book even more. Here is a really great, thoughtful review from Casey Plett: http://plenitudemagazine.ca/casey-plett-reviews-meredith-russos-if-i-was-your-girl/

Lizard Radio, by Pat Schmatz. Dystopian young adult sci-fi, with a non-binary narrator and gorgeous, lyrical writing. Full disclosure: the author is a good friend of mine… but it’s not just me that loves it. Kirkus and School Library Journal both gave this novel starred reviews and it just won the Tiptree Award, for fiction that expands our understanding of gender.

Otherbound, by Corinne Duyvis. This debut novel got multiple starred reviews and won the Bisexual Book Award. The main characters include a bisexual girl and a teen boy with a physical disability– and it’s a very original, twisty, hard-to-put down fantasy novel that will appeal to lots of teens. It also deals thoughtfully with issues of power and privilege.

appy Than Not, by Adam Silvera. A funny-but-dark, geeky, clever novel set in the near-future, about a gay Latino teen boy living in the Bronx. Emotionally gut-wrenching. This one’s also piling up the starred reviews.

( I also have links to some great online lists on my website: http://robinstevenson.com/lgbtq-novels-teens/)

What advice would you give to libraries that are looking for ways to better serve LGBTQ families in their communities?

I think visibility is key: I’ve loved seeing photographs of Pride Month displays at various libraries this month. Queer-positive posters, rainbow flags, anything that sends a message of support and inclusion…I think these seemingly small gestures of welcome are actually quite powerful. Inclusive programming matters too: invite LGBTQ authors to give readings or workshops, host an LGBTQ book club for teens and let the local high schools’ GSAs know about it, check in with local LGBTQ organizations to find what they’d like to see offered.

And of course, having a good selection of LGBTQ books readily available on the shelves that kids and teens browse. I visited a queer youth group recently (not in BC) and the kids told me that their local library had no LGBTQ YA books at all. I asked if they had requested them, because perhaps another branch might have them, or perhaps the library could order some—but none of them had. So the fact that people aren’t asking for the books doesn’t mean they don’t want them. Many young people may not be comfortable asking for an LGBTQ book.

As an LGBTQ writer, have you noticed changes in the publishing industry with regard to LGBTQ authors, stories and subjects? Are there any gaps that stand out to you?

There are an ever-increasing number of YA novels with LGBTQ characters, which is wonderful. In terms of gaps… hmm. I’d like to see more diversity with respect to the LGBTQ identities represented (eg. non-binary, gender queer, pansexual, asexual etc) and I’d like to see more intersectional identities shown. I’ve heard some writers say that they’ve been told that their stories are “too diverse” because they feature characters who are, for example, queer and disabled. Which is absurd: obviously a queer character is just as likely to have a disability as a straight character. It shows that despite the progress, we are still treating straight, white, able etc as default categories and everything else as “other.”

I’d love to see more queer families represented in picture books, including books where it’s not the focus. Just books about kids having adventures and then going home to their two moms. I was desperate for those when my son was younger and there are still so few of them. And I think we need to see way more LGBTQ representation in stories for middle-grade kids. There is still so very little out there for kids aged 8-12. It doesn’t always have to be the focus: I try to include queer characters in all my books, even if they are peripheral. In The Summer We Saved the Bees, for example, Wolf’s family stays with his mom’s friends who are a lesbian couple with two kids. I’d like to see more of that: just more books populated with a diverse cast of characters that actually reflects the world we live in. It doesn’t seem too much to ask.

A major thank-you to Robin for enthusiastically and generously sharing her time and her thoughts with us. Robin has a number of fantastic resources on her website, so do check it out for more LGBTQ information and ideas.