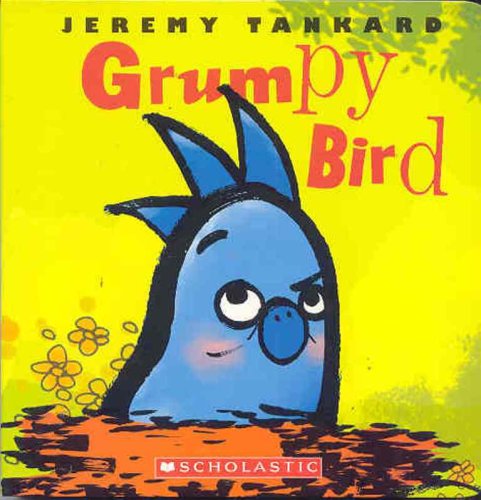 “When Bird woke up, he was grumpy.”

Well, who can’t relate to that opening sentence? I think we’ve all woken up on the wrong side of the bed like Bird, grumpy and grouchy for no apparent reason, and frustrated to the brim with the world and everyone in it.

Bird is too grumpy to eat, he’s too grumpy to play, he’s too grumpy even to fly, which means he has no choice but to walk to get where he’s going. Turns out all the other animals in his neighborhood LOVE walking, and Bird quickly finds himself a pied piper of sorts, leading the rest of the animals in a jaunt around the woods. When Bird realizes that the other animals are following his lead, and that he can make them do silly things like stand on one leg or jump, he forgets all about his grumpy mood, and invites all of his new friends back to his nest for a snack.

OK, so it’s not the most complex picture book out there, but that’s what makes it such a perfect group read-aloud. The story is short and direct enough to grab and hold the attention of a wiggly audience, the text is simple with just enough repetition, and there are plenty of opportunities to really ham it up as Bird grows more and more exasperated with his too-cheerful neighbors. The illustrations are just awesome – bold black lines, simple shapes, expressive characters, primary colours and few fine details make for eye-catching images that really work well when shared with a crowd.

Grumpy Bird is just so appealing because we’ve all been Grumpy Bird – grumpy, grouchy, and annoyed by every chirpy, cheerful, annoyingly well-meaning person we come across. Hello, Mondays….

Originally from South Africa, Jeremy Tankard lived in several different cities before settling with his family in Vancouver. He was the artist for the BC Summer Reading Club in 2014, and is the author and/or illustrator of several picture books. I also met him once when he brought his family into the central library (I gave him the key to the family washroom), and he was very nice.

I checked my email this morning to discover that an after school group was coming to visit my branch this afternoon, and that they were hoping for a story time. I said, without hesitation, “of course!” One great thing about being an auxiliary librarian is that last-minute story times don’t phase me in the least.

I don’t often get to work with school-age or “middle years” groups, so it’s great to step outside of my comfort zone every once in a while and interact with different age groups.

The afternoon group really just wanted me to share a few stories with them, so I followed my own tried-and-true advice and pulled out a few old favourites that I knew would be fun to read aloud to the older kids.

An enthusiastic but not particularly bright squirrel tries to help a little lost owl find his mother. Kids love rolling their eyes at the squirrel’s hilariously unsuccessful attempts to reunite mother and baby.

Everybody loves grumpy animals – just think of the internet sensation that is Grumpy Cat. This book is a lot of fun to read – I love making Grumpy Bird get more and more over-the-top exasperated by his increasing band of animal followers. Because as we all know, nothing makes a grumpy person grumpier than a cheerful person who just can’t help being cheerful.

Normally I might have considered pulling out Bark, George, as it works with audiences of almost all ages, but having just read it four times over the weekend, I needed a bit of a break from good old George!