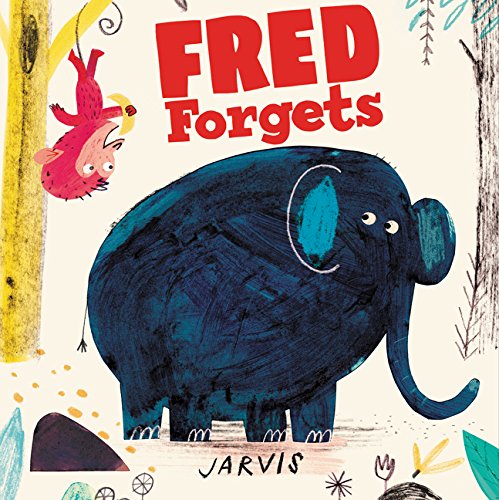 It’s this desire to see rights wronged that makes Fred Forgets sound so kid-pleasing. A mean monkey takes advantage of a memory-challenged elephant, only to receive his comeuppance when the elephant suddenly realizes that he’s been take for a ride. It’s a silly story to be sure, and there’s a “no elephants or monkeys were harmed in the making of this book” disclaimer for any caregivers who might be put off by the final scene of cartoon violence (though that monkey seriously deserved what it got). Some reviewers have suggested that the story promotes violence as a suitable response to bullying, and sure, it would be more appropriate to have the monkey and the elephant sit down and talk about their problems and their feelings and come to a mutually agreeable solution. And yes, the monkey is a total jerk, and some of his pranks are unnecessarily dangerous (encouraging the elephant to swim with sharks?) and insensitive (making fun of someone for wearing a dress is definitely last century and really isn’t appropriate anymore). But the book is also extremely goofy and over-the-top silly, and I do think that kids will find it funny, and not necessarily see it as a blueprint for their own problem solving strategies. Seeing “bad guys” get what’s coming to them is part of what makes Roald Dahl’s stories so appealing – evil characters don’t learn the errors of their ways and make amends in a heart-warming finale, they get squashed, and I can still remember how good that kind of justice felt to read growing up.

So, I’m a bit conflicted. I don’t mind the general storyline – a monkey teases his friend by making him do goofy things but gets his comeuppance in the end. I just wish the monkey’s antics weren’t so mean-spirited, and that the elephant’s retaliation was more thoughtful – letting the monkey get a taste of his own medicine so he could see how he likes it, or something like that. It’s not a bad idea, but it could have been executed differently.  Pick up a copy at your library and let me know what you think!

So many picture books, so little time!! I’ve got another pile of illustrated stories to share with you on the blog this week, some new, and some just new to me. I really like sharing a mixture of bright, shiny new picture books as well as those that might have flown under the radar a bit, or that I think might be hidden gems just waiting to be rediscovered. Having a desk that’s just a few steps from a wall of picture book shelves certainly makes my writing life easier – all I have to do is close my eyes and pull out a handful of books, and I’m pretty much guaranteed to find at least a few great titles!

Here’s what I’ve got coming up on the blog this week:

What Makes a Baby

On the grown-up reading front, I’m currently working my way through my first Anne Perry novel, a murder mystery set in Victorian England. Thomas Pitt is a police inspector, and Charlotte Pitt is his wife, who assists him with his cases (though not always with his blessing). I haven’t finished this one yet, but I’m really quite enjoying it. The historical setting feels very real, and the murder plot is engaging, as Thomas and Charlotte pursue two very different possible paths of deduction. I don’t think I’ve figured out who is the murderer is yet, but I do have my suspicions!

Have a great week everybody, and don’t forget to check back in throughout the week for my thoughts on the picture books I shared above!