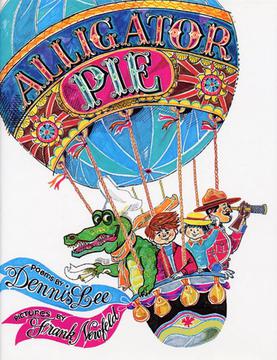 Dennis Lee is one of Canada’s great gifts to the world. Don’t believe me? Just feast your eyes on this excerpt from Lee’s Wikipedia page:

Lee began writing for children as part of his goal of “Reclaiming language and liberating imagination;” he “tries to free Canadian children from a colonial mentality by creating poems rooted in the words and activities of their everyday lives, poems which encourage free imaginative play.”[1] His most famous work is the rhymed Alligator Pie (1974). He also wrote the lyrics to the theme song of the 1980s television show Fraggle Rock and, with Philip Balsam composing, many of the other songs for that show. Balsam and Lee also wrote the songs for the television special The Tale of the Bunny Picnic. Lee is co-writer of the story for the film Labyrinth.[2]

That’s right folks. Not only did Lee create some of the most beloved Canadian children’s poetry of all time, rooted in a desire to encourage “free imaginative play”, he also helped create both Fraggle Rock and Labrynth. The man is pretty much a genius.

In all seriousness, though, the children’s poem Alligator Pie is without a doubt one of the most famous and beloved poems the country has ever produced. It’s weird. It’s wacky. It really doesn’t make any sense. And yet I remembered each word from that first stanza, despite not having heard or really thought about the poem for years.

This is definitely a Canadian poem, though I suppose I could begrudgingly admit that some Americans might be moved by the reference to a hockey stick.

Yes indeed – this child so loves alligator soup that they are willing to sacrifice their hockey stick for it. That is some powerful love right there, a love even stronger than that of hockey.

Alligator Pie beautifully sums up Lee’s passion for “creating poems rooted in the words and activities of their everyday lives, poems which encourage free imaginative play.” The words are silly, fun and imaginative. They reference objects that children would be familiar with, and which would have meaning to them – a hockey stick, a hoop, a furry hat (hello winter…) and a show – real objects that kids can see, touch, experience. Lee blends the madcap with the mundane, bringing a bit of nonsensical whimsy into our everyday lives.

This isn’t Poetry with a capital P in the classical, or as Lee might say colonial sense. It isn’t elitist, obscure, undecipherable or remote. This is fun, silly, lighthearted and yet very much real and rooted in every day experiences and realities. This is poetry that is meant to be enjoyed, shared, loved and remember. It’s poetry that makes poetry approachable, and demystifies the experience.

For all these reasons and so many more, Dennis Lee’s Alligator Pie is a Canadian poetry classic that transcends generations.

Join the Poetry Friday community to share your love of poetry!