If you’ve followed my blog for a little while you’ll likely have already heard me rave about the works of Cree-Metis author/illustrator Julie Flett. Originally from Toronto, Flett has been based on the West Coast for over twenty years. She is an activist as well as an author/illustrator, and is an active campaigner for indigenous rights and education, language preservation, and women’s issues, particularly with regard to Aboriginal women in Vancouver’s notorious downtown eastside. 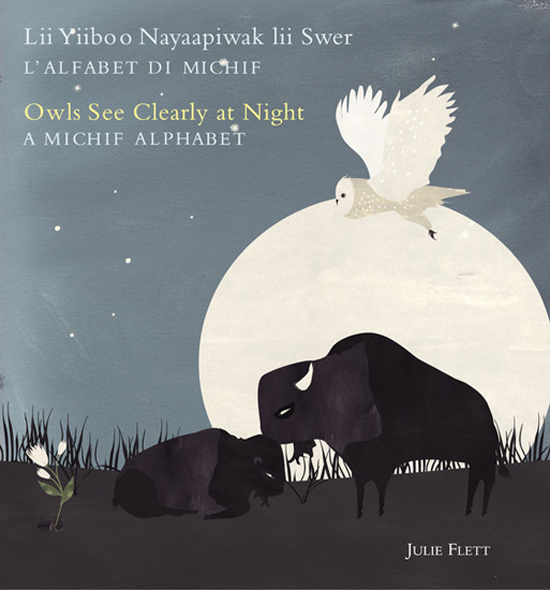 Flett’s commitment to supporting language acquisition and preserving indigenous languages can be seen in her stunning Michif alphabet book, Owls See Clearly At Night, which was nominated for a Governor General’s Award for Children’s Literature.

Michif is the traditional language of the Metis people, who are one of three Aboriginal populations as defined by the Canadian constitution, and who are traditionally based in the prairie provinces, primary Manitoba. Their culture and language are a blend of Aboriginal and European roots, with a particularly strong French influence. Michif is a complex language that evolved from a merging of Cree, French, English, and other Aboriginal languages, including Ojibwa and Assiniboine. It is also unfortunately a critically endangered language, with only about 1000 fluent Michif speakers still remaining.

Owls See Clearly At Night is indicative of growing movement dedicated to revitalizing threatened indigenous languages. As an alphabet book it serves as a means of introducing both Metis and non-Metis readers to the basic fundamentals of the language, as well as important cultural elements. Significantly, Owls See Clearly At Night is a Michif-English alphabet book, with the Michif text given the most emphasis, turning the traditional linguistic power dynamic on its head.

Elegant, beautiful and power, Owls See Clearly At Night is an ode to a powerful language that might be dying, but which can still be saved. The Metis language is only one of thousands of threatened languages around the world. According to the BBC,

Over the past century alone, around 400 languages – about one every three months – have gone extinct, and most linguists estimate that 50% of the world’s remaining 6,500 languages will be gone by the end of this century (some put that figure as high as 90%, however).

Languages “are conduits of human heritage…Languages also convey unique cultures. Without the language, the culture itself might teeter, or even disappear.” Language shapes the way we see the world and our place within it, and influences every aspect of our culture. In many indigenous communities language has played a critical role in cultural transmission, as knowledge was traditionally passed down through generations orally, and not transcribed. Cut off from their traditional languages, minority communities in countries around the globe can be dangerously  weakened and entire cultures may be lost. By preserving their  languages and supporting their growth and development, indigenous communities can strengthen their bonds both within their communities and with their ancestors, linking themselves with their past and building a strong foundation for the future.

3 thoughts on “Owls See Clearly At Night : A Reading Staycation”