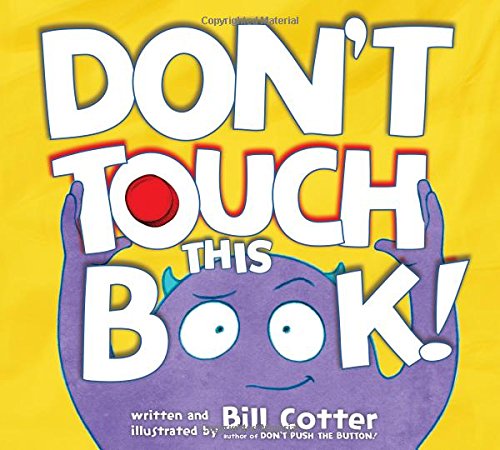 Bill Cotter’s previous picture book, Don’t Push The Button!, became my unofficial book of the summer this year – I brought it with me to a couple of Summer Reading Club school visits, and ended up reading it aloud at least 10 times. It’s so much fun – few things in life are more tantalizing than a big red button, especially one that you’re not allowed to touch. Kids delight in watching Larry the monster wrestle with his conscience, and they love joining in with him as he finally snaps and starts pushing the button. I love doing a dramatic “1, 2, 3….BEEP” with the audience as we all push the red button together.

I was pretty excited when I heard that Cotter was coming out with a follow-up to Don’t Push the Button!, called Don’t Touch This Book! I was even more excited when I saw a bright red button featured on the front cover!

Well….I hate to say it, but I really prefer the original when it comes to this series of picture books. Don’t Touch This Book! has some really fun elements, but it lacks some of the charm that made me love its predecessor so much.

One of the things that makes Don’t Push the Button! so much fun is that the audience and the main character are always on the same side – neither side is supposed to push the button, but together they decide to break the rules, making them co-conspirators in a silly exercise.  In Don’t Touch This Book!, Larry is back, but to be honest he’s kind of a jerk this time around. As the owner of a cool new book, Larry is the one setting the rules, and he’s the one who decides who gets to touch his book. Larry tells the audience what they can or can’t do, coming across as kind of bossy in the process. We don’t get to see Larry hilarious wrestling with temptation like we did before, and we don’t feel like we’re on the same side with him against some mysterious, no-fun button-maker.

There’s a lot of interaction this time around, and it could be fun to get kids talking like a robot, roaring like a dinosaur and flapping their wings like a bird. But I miss the cheekiness of the original, which really capitalized on the thrill of breaking the rules and being just a little bit naughty. Kids’ lives are dominated by rules – they’re constantly being told what to do and when to do it, and have very little real control over their lives. There’s such a thrill in being able to break the rules, even if just in a story. In Don’t Touch This Book!, the audience spends the entire time being told what to do and following instructions, even if Larry does warm to them in the end. It’s still fun, but it’s just not quite the same. I’ll stick with the original.