It’s Monday, What Are You Reading? was initiated by Sheila at Book Journey, and adapted by Kellee at Unleashing Readers and Jen at Teach Mentor Texts with a children’s/YA focus – perfect for a children’s librarian like me. This weekly roundup is a great way to discover new blogs and bloggers, share recommended (or not so recommended….) titles, and add to your ever-growing to-read list.

Another week, another bumper crop of picture books to share. 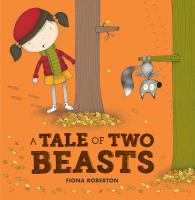 Title: A Tale of Two Beasts
Author/Illustrator: Fiona Roberton
Publisher: Kane Miller EDC Publishing
Publication Date: 2015
Genre/Format: Fiction/Picture Book
Publisher’s Summary: There are two sides to every story. In part one, a little girl finds a strange beast in the woods and takes it home as a pet. She feeds it, shows it off to her friends and gives it a hat. But that night it escapes. Then, in part two, the beast tells the story of being kidnapped by the girl, who force-fed it squirrel food, scared it with a group of beasts and wrapped it in wool. Can the two beasts resolve their differences? An eye-opening story that makes you look at things from a different perspective.

My Two Cents: This nifty little picture book is actually two stories in one, each told from a different perspective. This would be a great text for initiating discussions about perspectives, points of view, opinions, communication, compromise, etc. An extension activity could include retelling other picture books from the perspectives of supporting characters.

Title: The Bear’s Sea Escape
Author/Illustrator: Benjamin Chaud
Publisher: Chronicle Books
Publication Date: 2014
Genre/Format: Fiction/Picture Book
Publisher’s Summary: More adventures await The Bear’s Song’s Little Bear and Papa Bear. When the bears seek warmth from their chilly perch atop the Paris Opera House, Little Bear is mistaken for a toy bear and whisked away . . . to a tropical island! Papa Bear sets out on a frenzied journey to find Little Bear, traveling to a bustling wharf, beneath a sea brimming with coral and mermaids, onto a busy beach, and all the way to a sun-drenched island. As in The Bear’s Song, Little Bear is featured in every spread. Will Papa Bear—and the reader—find him? Children and parents alike will savor Chaud’s lush, detail-rich illustrations and the sweet story as well as the book’s bonus seek-and-find elements.

My Two Cents: I’m glad that we’re getting more translations of foreign-language picture books, because they often add such variety to our collections. This French picture book is brilliant – the sparse text tells the surreal tale of a bear and his cub, but it’s the ridiculously intricate illustrations that steal the show, as the bears find themselves in a series of ornate and almost chaotic environments. Like Where’s Waldo? before it, The Bear’s Sea Escape challenges children to find characters in a sea (pun intended) of detail, and the illustrations provide nearly endless opportunities for examination, discovery and exploration. I found the vintage-inspired illustrations reminiscent of another favourite – Madeline.

Title: The Octopuppy
Author/Illustrator: Martin McKenna
Publisher: Scholastic
Publication Date: 2013
Genre/Format: Fiction/Picture Book
Publisher’s Summary: Can the OCTOPUPPY be the perfect pet? Edgar wanted a dog. Instead, he got an octopus named Jarvis. Jarvis is brilliant and does his best to act like the dog Edgar wants, but nothing he does is good enough to please Edgar. Ultimately, Edgar recognizes that while Jarvis might not be the dog he wanted, he is special in his own endearing way.
Young readers will love the funny, imaginative illustrations that are paired with a relatable lesson of appreciating the greatness of what we have in front of us.

My Two Cents: The storyline of The Octopuppy is less original than its surreal title and cover illustrations might suggest. A young boy wants a dog, but gets an octopus instead. His disappointment and dissatisfaction with his pet octopus blind the boy to the octopus’ numerous charms. Eventually, though, the boy realizes that while the octopus isn’t the pet he initially dreamed of, he’s the perfect pet after all. Replace the octopus with a sloth, a little brother/sister, a bicycle the wrong colour, a step-parent, or a move to a new town, for example, and you have the makings of any number of children’s books in which characters learn to see the positives in unexpected or initially disappointing circumstances.

Where The Octopuppy really shines, though, is in its illustrations. Have you sensed a theme in my book reviews? I am passionate about illustrations. Illustrations can compliment, expand upon, reinforce and illuminate text, turning simple stories into memorable experiences. Martin McKenna’s illustrations are awesome. The facial expressions alone are worth picking this one up. Each illustration is packed with humorous detail, and the strangely-proportioned characters are utterly charming. The storyline of this one might be familiar, but the images are certainly novel.

So….what have you been reading this week?