I first made felt stuffed toys with the teens over the summer as part of our Teen Maker’s Camp, and it was without a doubt our most popular craft. The teens just loved making little toys and ornaments for their backpacks – I included a few fun templates like Pacman and little monsters that were a major league hit.

This time around we chose a few simple templates – a stocking, a Christmas tree, a gingerbread man and a star. We had red, green, brown and yellow felt for traditionalists, but also some purple, pink, blue and other colours for the nonconformists among us. 😉 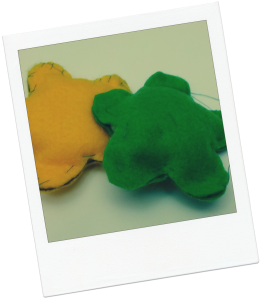 Step 1: Trace the template twice onto a piece of felt and cut out.

Step 2: Sew or glue on decorations (it’s much easier to put them on before sewing the stuffie together!)

Step 3: Sew the two pieces of felt together, using either a running stitch or a blanket stitch. Don’t sew all the way around – leave a gap so you can stuff in the stuffing.

Step 4: Once you’ve stuffed your stuffie, finish sewing it closed.

We had some very skilled sewers among us, and everyone was really into the craft – boys and girls, older and younger teens – it’s a surprisingly popular craft that never seems to fail us! The sewing station was actually one of the quietest in the room, as the teens were concentrating so completely on their craft that there was barely any talking at all!